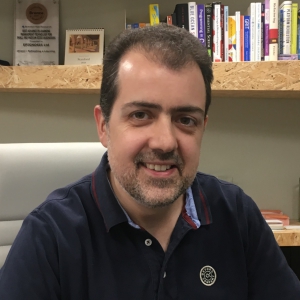 Vangelis Mihalopoulos started off his career as Software Engineer in 2003. Before completing his BSc in Computer Science, he was already working in big ICT projects. Having experienced first-hand the process of developing robust software for numerous big clients, and after completing his MBA in 2009, he moved on to manage software development teams. With his team, he successfully participated in EU-funded research programmes, while continuing to work on private sector projects.

In 2012, he co-founded Flipnode LLC, working on a complete Unified Communications platform based on Open source technologies. The platform was soon launched and distributed by Greece’s largest Telecom Operator, with great success in the local market.

Building on his extensive technical know-how, in 2014 he pivoted his team into creating Yodeck, the top Digital Signage platform for the Raspberry Pi. He was an essential part of the development team, until the beta launch of the service in late 2015. Since then, Vangelis has been leading Yodeck into commercial success as the company’s CEO. His vision for a Digital Signage solution that can be so affordable and so easy that anyone can deploy, has kept Yodeck growing by over 10% each month, doubling the headcount each year. With thousands of customers and more than 85 reselling partners in 28 countries, Vangelis managed to take an idea and turn it into a successful business.

Vangelis is also the co-Founder of Starttech Ventures, a Greece-based Seed Fund and Accelerator. With his extensive experience on building and launching software products, he actively mentors the Starttech team into supporting and growing incubated startups.

In March 2019, Vangelis was included as one of the top “40-under-40” young business executives in Greece by Fortune magazine, a recognition of his achievement in growing an internationally successful business out of Greece.